With the new college soccer season just around the corner, it’s time to take a closer look at some players that may just be the key for Stanford’s Women’s Soccer Team to win an NCAA title. After a disappointing 1-0 loss to Santa Clara in the NCAA championship third round last year, they’ll look to come back this season stronger and better. Although they won their 11th Pac-12 conference title last year, they’ll still be looking to come out powerful this season and win an NCAA championship- and here’s the 3 players that could help them reach the title they haven’t earned since 2011.

This junior forward had 8 goals and 4 assists in 40 games, but more importantly only 7 games that she’s started. Arguably her most impressive performance came in a game against Oregon, where she came in as a sub in the second half and scored her first brace, giving Stanford the 3-2 win when she scored with 2 seconds left in regulation. While she only started 7 out of her 21 games in the 2016 season, she’ll be looking to become a regular starter, adding much needed firepower up front for Stanford. Collins has made her mark for the 2016 season with winning the Pac-12 All-Academic honorable mention and being the second among the Cardinals to earn 13 points against Pac-12 opponents.

In the 2016 season, this forward had 10 goals and 16 assists in her 44 games played. She lead her team with 10 assists in the 2016 season and 6 in 2015. Carusa has had a handful of awards at Stanford, including two-time Pac-12 All-Academic honorable mention, 2015 Pac-12 All-Freshman team, two-time All-Pac-12 Second Team, and the 2016 NSCAA All-Pacific Region Third Team. She’s one of the best at not only finding her teammates in open spaces, but setting them up to put the ball in the back of the net. If last season is any indicator on what Carusa brings to the field this season, Stanford will have a terrific time as Carusa sets up goals and players like Averie Collins scoring.

Without a doubt, this midfielder is one of the best players on the Stanford team as of today. Unfortunately, she suffered an ACL tear playing for Stanford, but she should return during this season. Sullivan has been an active part of the attacking side for Stanford, leading the team with 11 goals in the 2016 season and 5 in the 2015 season. In her 65 college games, she’s had 17 goals, 13 assists, and is 6-7 on PK attempts. Sullivan also has a number of accomplishments including MAC Hermann Trophy Finalist in 2016, two-time MAC Hermann Trophy Semifinalist, two-time NSCAA First-Team All-American, 2016 Pac-12 Player of the Year, and the list goes on and on. Although she’s only a senior this year, she’s already made her mark on the National Team with 4 caps, being called into camp alongside her recent graduated Stanford teammate, Jane Campbell. Overall, Sullivan is a beast on the field, and should be considered one of Stanford’s best players for the upcoming season. 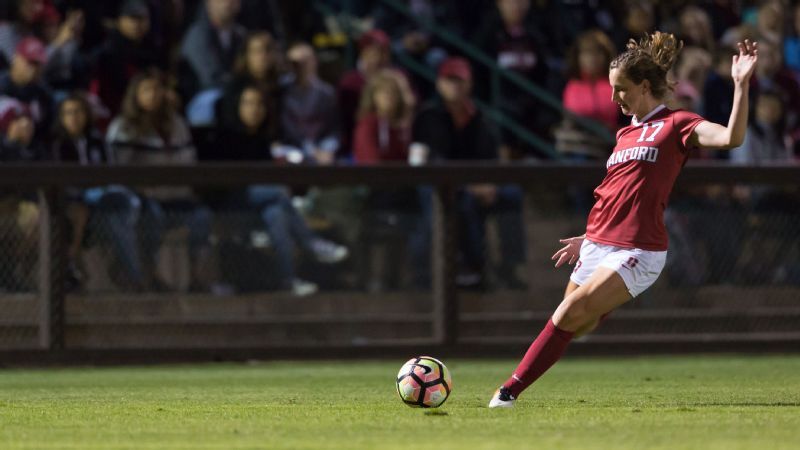 With these three players in the mix, it’s hard to imagine a season where Stanford doesn’t go far in both the NCAA and Pac-12. With Sullivan’s explosive talent in the midfield, mixed with Carusa’s talent of assisting, alongside the passion of Collins to become a regular starter, these three players are going to give their opponents quite a handful. Not only with Sullivan, Carusa, and Collins, but the rest of the Stanford’s women team behind them, I predict another trophy in their near future.